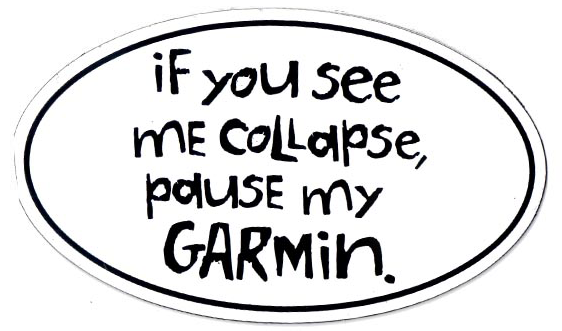 The Washington Post recently dropped a link to this article from December in one of its newsletters, and I finally realized I’ve seen a lot of these takes over the last few years as wearables have become ubiquitous: maybe you should stop using a fitness tracker, if you’re letting it tell you what to do and it’s making you anxious. These articles feature lots of precious quotes about losing the ability to simply enjoy taking a walk and so on. Not infrequently, the tracker that ends up getting junked is one that was provided gratis by an employer or an insurance company. It’s a basically good idea for an article that is routinely undermined by superficial and extremely incomplete treatment.

Employers and insurance companies often provide simple trackers such as devices from Fitbit, who aggressively courts this business. Based on wristwatches, these devices are easy to use and interact with, and they promise to provide a wealth of data (particularly around notoriously hard-to-measure activities such as sleep). It is common to fall down a whole series of rabbit holes, seeing what it tracks, seeing how you can influence that, and fretting about numbers that don’t seem “good enough.” If you learn more about the technology or just observe very closely, you soon see the weaknesses in the measurements themselves or in the conclusions drawn from them – from simple miscounts of steps to poor extrapolations of mileage to some truly laughable “sleep detection” failures. And once the trust is gone, the brain goes all kinds of bad places.

One problem with mainstream media articles on issues around fitness trackers is that they almost always assume a Fitbit-like wrist device and flatten the discussion to the category of “trackers” as if that is the only form factor. Although some “rah rah fitness tracker!” product pieces discuss the wide variety of options, I don’t think I have ever seen an article about user ambivalence go on to discuss the different types of trackers available. Some people will prefer a simpler device that gives them gentle nudges to move about more during the day, or something that tracks without constant readouts a glance away. Bellabeat makes jewelry-style trackers that can be worn as clips, pendants, or bracelets and that have no screen. There are several simple – and inexpensive – pedometers that can be clipped on or hung from a loop for people who just want to track a step goal, which can also, for that matter, be done with free apps on a smartphone. I understand a bit about how an article is planned in these environments, but this is a great example of how a specific focus robs the piece of value for the reader. In this case the reader is invited to relate to the person who is stressed by the tracker (or to judge that person as weak or not “getting it”), nothing is learned, and the comments section fills up with predictable trash.

Another problem with these articles is the narrative around the value – or risks – of the fitness tracker. Like a lot of issues involving productivity, health, and happiness, the dysfunctional-fitness-tracker story is typically framed around the individual who either can’t seem to get the process right or who is, perhaps rightfully, frustrated by being told what to do by a little piece of metal and plastic. Very few issues involving productivity, health, and happiness are fully in the individual’s control. Between schedules, commutes (or home environments that making working there a challenge), family commitments, and everything else, any change a person wishes to make almost always touches multiple moving parts, many of which touch other people who might push back in ways that are impossible (or inappropriate) to reject.

This willingness to, in essence, blame the individual is particularly annoying to me when a very reasonable quote about the challenges of developing a good food pattern comes from someone who sells coaching or instruction in “intuitive eating.” If it’s intuitive, you don’t need a coach for it. But it’s not even intuitive – the term is used for a variety of practices that involve deliberate food choices, changing your emotional relationship with food, and otherwise being more present and mindful and positive about eating (as opposed to using a reward/punishment frame). I love all those things, and I definitely love an anti-dieting frame for talking about eating, but calling any of that “intuitive” just seems like an extra twist of the knife in the back of everyone who finds it nothing of the kind, ie, almost everyone.

Most surprisingly, I can’t remember seeing a mainstream media article address both user ambivalence AND the source of the tracker. There is a separate genre of article – the discussion of privacy issues around insurance- or employer-provided devices (example linked above) – that clearly details the contextual issues that probably should make an individual reluctant to use a device from those sources. But even mentioning those issues is rare in the “is your fitness tracker making you obsessed” articles, even when quoting people who received the tracker from an employer or insurance company. It beggars belief that these articles have no room for a single quote along the lines of “Yeah, maybe the company-provided device or wellness program isn’t the right path. Some people just need [a different form factor | a free phone app | something that lets them control their data in a particular way].”

The end result is the same careful instruction in learned helplessness that characterizes the fitness / health / wellness industry as a whole: A small insight into a problem. A narrow, narrow discussion of one way of resolving it. An overall emphasis on the individual, with near-zero acknowledgement of the family, work, and social contexts that individuals spend their whole lives in. And no meaningful information about the kinds of questions a person should ask about what they want from a fitness tracker (or other form of accounting – could be a paper calendar with stickers!) that will help them get what they need when embarking on a deliberate change or management of a behavior – or even a hint that such self-understanding is a possibility.

An abrupt migration has broken some image links. Little by little they will be coming back!

Update: All (the local ones) fixed!

Well, not all of it – some of it is legitimately awful taxidermy. But some of the entries at Crappy Taxidermy are clearly trying to do something other than simply mount the remains of animals in order to preserve a lifelike appearance.

Did you go there yet? OK, admittedly, a lot of it is just awful. If you’re patient, though, you’ll see some weirdly wonderful things in there.

Claire Morgan makes astonishing assemblies of taxidermied animals and other materials, meticulously placed with nylon strands. She uses many kinds of animals and insects, as well as fruit and leaves. I don’t have any idea what to make of any of it. I can’t decide whether I love it or would never want it in any space I occupy, even briefly (I or the work). Lots more photos of many installations over the last seven years at her website.